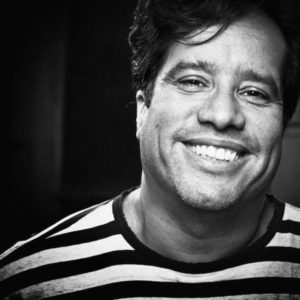 John “Jellybean” Benitez: music producer, composer, performer, film producer, executive and mogul. A one-man conglomerate who has utilized his inimitable talent to assemble his own multimedia empire and whose career is a tale of remarkable innovation, adaptability, durability and achievement.

The self-contained synergy that is the Benitez trademark became apparent long before the word emerged in business lexicon. His instincts have constantly steered him in new directions, and seem never to have failed him. From his love of music as a teenager at home in the Bronx—to his breakthrough days as an ingenious master-mixer DJ in Manhattan’s hottest clubs—to the recording studio where he has produced the musical superstars of the last two decades—to the composition of themes for hit television shows, to musical scores for Hollywood films—to the creation of his own publishing company and record label. It’s all resulted in a stellar and uniquely prolific catalog of achievement that spans nearly two decades and embraces a multitude of musical styles and trends.

Benitez has produced and/or remixed over one-hundred “Top 10” hits and more than thirty-five #1 records, and has compiled an unrivaled discography of platinum and multi-platinum smashes. A glance at the credits listed under Jellybean Productions (launched in 1983) reveals a veritable “Who’s Who” of diverse musical talent that includes music legends such as Madonna, Michael Jackson, Whitney Houston, Santana, Sting, Shakira, Barbra Streisand, Paul McCartney, Marc Anthony and Billy Joel.

In addition to his incredible success as a producer, Benitez also earned acclaim as a performer with his debut album Wotupski?! (EMI, 1984), which generated two number one dance hits, “The Mexican” and “Sidewalk Talk” (which also broke the top 10 of the Billboard 100 charts). Additional personal efforts included Spillin’ The Beans on Atlantic (1991) and the platinum selling 1987 release, Just Visiting The Planet, on Chrysalis, that featured 4 singles in the Billboard 100 and the #1 Dance Single “Who Found Who” .

Jellybean continued his creative and diverse journey down a path filled with new ventures and opportunity. He soon took his musical talents from the dance floor to the sound stage, composing themes for hit TV programs including The Ricki Lake Show and PBS program American Family, and serving as music supervisor on a number of successful films such as Carlito’s Way and Species. Other film projects of note include credits as music supervisor/composer and/or associate producer for such films as Angel Eyes (Warner Bros., 2001, starring Jennifer Lopez), and Get Carter (Franchise/Warner Bros., starring Sylvester Stallone). He was executive producer, with long-time friend and collaborator John Leguizamo, of the Cinemax documentary Nuyorican Dream.

In 2001, he took on yet another groundbreaking role as executive producer for the HBO Films Biographical Drama The Arturo Sandoval Story, depicting the life of the renowned trumpet player whose life and musical artistry were squelched under the oppression of Communist Cuba and who ultimately defected to the United States. It earned a Golden Globe and four Emmy nominations. In addition, Benitez was awarded an Alma for best producer.

Today, Benitez’s synergistic business has continued to grow with the development of three record labels, Fuego Media, Jellybean Recordings and H.O.L.A. Associates. These labels distribute a wide range of music through various subsidiary labels such as Fuego, HOLA, Jellybean Soul, Don Juan Media, and Devotion. These labels have continued Benitez’s string of #1 and top 10 Hits, and have blazed a new trail in the digital sales market.