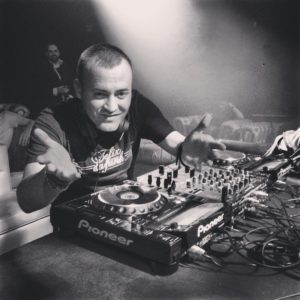 Ibicenc born in 1983. he´s a house music lover in all its styles.
His carrer began as a dj in clubs such as Privilege, playing in the pre -parties of mitic Balearic People and then at warm up´s every saturday in summer 2003.
He also had colaborated in others Ibiza´s clubs like la diosa wich it´s in the heart of the island.
Years later the opportunity of playing at space appears with oscar colorado by then started in differents clubs like Es Paradis Terrenal or Eden.

In 2006 he established a residence at eden every friday creating a unique funky house party with locals dj´s and featured colaborations from dj´s like Deep Josh, Camilo Franco.
In the same time had an other residence at sunset Bay Bar every sunday.

His sets outstand for the variance and his own versatility on playing tracks, so we can enjoy the most elegant house as comercial house tech.

In summer 2009 got the residence at El Divino.

Nowdays he is colaborating with Ibiza Global Radio, where you can listen his best sets and the featured magazine as Deejay Magazine had nominated him to the Deejaymags 2010 Awards for the Deejay Newcommer Ibicenc category.

In 2011 is the Winner to the Deejaymag Award for the Deejay Newcommer Ibiza.

Today:
He contributes to Ibiza Live Radio where you can hear their best sessions. He also writes for the online site Deejay. Has released its 4º compilation through Epoque Music Label called Ibiza Beach House Vol.4

This work in the best clubs of the island and recently UNDERGROUND MJUZIEEK Records published his last produccion called Back U Baby.Currently resident parties deejay Ibiza Sensations @ Ocean Beach Club , Limbo Ibiza @ KM5 , I DO IBIZA @ Bora Bora Ibiza & Jockey Club Salinas.
Felix is the present and future of the new generation of djs and producers with the designation of origin Ibiza.
The if is a real … Ibiza resident dj